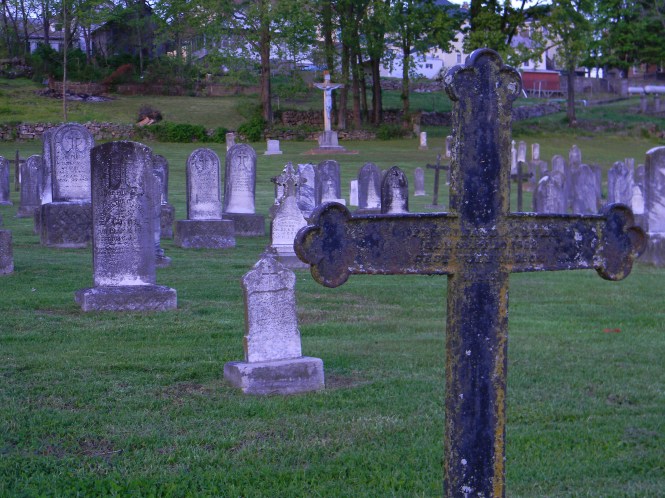 The discordant mix of highway noise, turtledoves and church bells lent a surreal quality to my visit to this little cemetery.

It was one of those slam on the brakes and make a right, no time for turn signals kind of stops. Ever had one of those? Two-lane, State Highway 63 twists through the eastern edge of the Ozark Mountains in southern Missouri.

About 20 miles south of the capital, Jefferson City, the landscape gets more and more rural. I passed through several tiny towns before the tall, marble crucifix that marked this graveyard called my name.

I parked in a large, gravel lot in front of an auto repair shop right beside the highway. A broken down school bus sat in one corner like it’d been there for years and would be for more. A well used tow truck was parked in front of the boxy, aluminum sided shop.

The Westphalia cemetery sits right next to it on a hillside gently sloping up toward a church with a high, pointed white steeple, the source of the tolling bells.

Twilight added to a sense of being slightly off-center to reality here. My step off the gravel and onto the cemetery’s thick, well-tended lawn was like a step out of time. 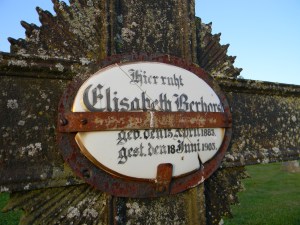 Icouldn’t translate the language on the markers.

I don’t speak a word of German. Even the street signs in tiny Westphalia are printed in two languages. The flowing script on the porcelain placards was beautiful though.

Iron work crosses spoke to the poverty and austerity of the folks who settled here.

I got the feeling from looking around that not much had changed.